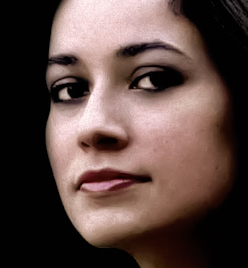 Daniela Manusardi, pianist and composer, received her first instruction in piano and composition at Conservatory “G. Verdi”, Milano, Italy where she graduated from the piano studios of Annibale Reaudengo and Carlo Levi Minzi with the highest marks in 1999. In 2005, she completed her composition degree with Mario Garuti.

In masterclasses, she studied with Rudolf Kehrer, Livia Rev and Karl-Heinz Kämmerling. In 1999 she won the Costigloile d’Asti piano competition and was awarded a scholarship from Otmar Alt Faundation in 2004.

Since 1994,Daniella Manusardi has performed as a soloist and chamber musician in international festivals in Italy, German, Romania and Switzerland. She is also a member of the Baynov Pianao Ensemble.

Her artistic activities include radio and TV productions in Italy and Switzerland (RSI) and for the record labels M.A.P. and Web-TV LIMENMUSIC. Her compositions have been performed at the Steinway & Sons 150th Anniversary festival, “New Music for New Performers” (Bergamo) and Ateneo Veneto (Venice).

She has been teaching at the music schools of Pieve Emanuele-Milano, Vermezzo (Milano) and Singen and as a professor at the Conservatory “A. Peri”, Reggio Emilia.

Since 2010, she is a full-time faculty member of the music school, Ravensburg.